3 FILMS BY JESS FRANCO (VAMPYROS LESBOS) COMPLETE TRACKS - THE ONE THAT STARTED IT ALL! 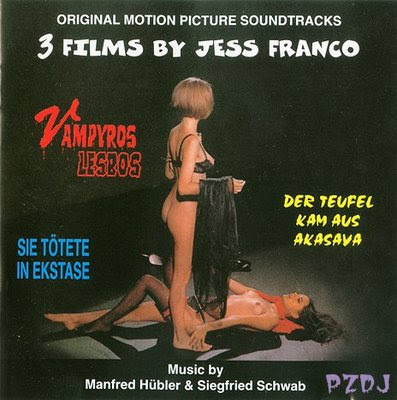 Here it is, yes, the one that started it all! You may at some point have purchased the "Vampyros Lesbos" soundtrack. But unless you have the original release, the one pictured above, you have not heard it all! Only this release contains all 24 tracks and they are ALL essential!

If, in your travels, you ever meet a German bloke named Peter Blumenstock, slap him on the back for me and buy him a beer. For it was he and his love of European exploitation movies - what film historian Craig Ledbetter dubbed "Eurotrash" - that gave him the inspiration to create the collector's CD label Lucertola. In 1994, for his first CD, Blumenstock released the excellent soundtrack compilation CD "The Films of Jean Rollin" to a limited edition of 1,200 copies. Now, understand that this music was really still very much a cult thing at this time. You couldn't even call it a cult, really, hardly anybody knew about this shit. And I believe that this "labor of love" release got a slow start start and those 1,200 took awhile to sell. Hard to believe now but it's true! And it's for that reason, it would seem, that upon releasing the next CD, "3 Films by Jess Franco", the run was a mere 500 copies. Lo and behold, this time around this strange new CD became a surprise blowout! (If you own one of these bad boys, go and slap yourself on the back!) So much so that the German progressive rock label Crippled Dick Hot Wax immediately picked up the rights. Only upon quickly re-releasing it the name was somewhat deceptively re-titled to "Vampyros Lesbos - Sexadelic Dance Party", a somewhat more obvious and commercially "hip" title. I say deceptive because the music tracks heard on this collection were actually used by Jess Franco for 3 different movies he shot back-to-back, all starring the lovely "Susann Korda" (aka Soledad Miranda), the titles of which are most commonly known as "She Killed in Ecstasy", "Vampyros Lesbos" and "The Devil Came From Akasava" (all released by the prolific director in 1970). 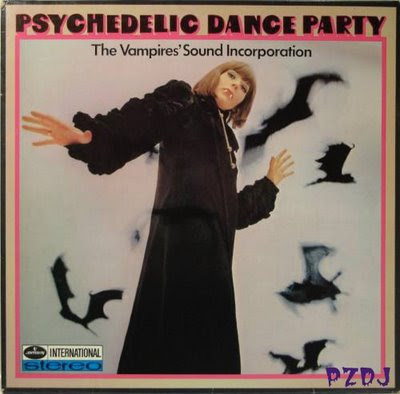 The music itself, composed by Manfred Hübler and Siegfried Schwab, was originally taken from 2 1969 LP releases (pictured above) "Sexadelic" and "Psychedelic Dance Party" (credited to the The Vampires' Sound Incorporation!). What makes the original "3 Films..." CD so much better is, for a start, that it retains a more satisfying order of the tracks. Tracks 1 to 11 are credited to the aforementioned Vampires' Sound Incorporation and seem to all be taken from that particular LP, while tracks 12 to 24 are presumably all from the "Sexadelic" record. The subsequent releases mix-up the order of the tracks. But what's much worse, the first re-issue, the "Vampyros Lesbos" CD removed a whopping 10 tracks!! Sadly it was this same sliced-and-diced version that the New York based Motel label re-released in the USA in 1996. And to make things even more confusing, the LP version and picture disc LP release (seen below) had slightly different tracks then the "Vampyros Lesbos" CD. That is, because of the LP's even shorter running time, several more tracks were removed while a few not on the CD were then added in hopes of making the customer double-dip (or triple if you also bought the pic-disc). But even if you had all 3 "Vampyros Lesbos" releases, the CD, the LP and the picture disc, you still did not have all 24 tracks as on the 1 original "3 Films..." CD release. Rumors of another re-issue coming out in 2006 seemed hopeful. And although some of the missing tracks were added, not all of the tracks were restored despite a (probably unnecessary) re-mastering. Now up to 17 tracks, perhaps there are plans for yet another re-release? Or would that be a re-re-release? How many times do these geezers expect us to buy this thing? Overall, some of the removed tracks were a bit more along the lines of a free-form experimental sound and not nearly as pop. But with these tracks in place and in context of the original order, listening to the full CD becomes a longer, more satisfying and mind blowing trip. True, this is only personal opinion, of course, but remember: I am your doctor and I know what's good for you! 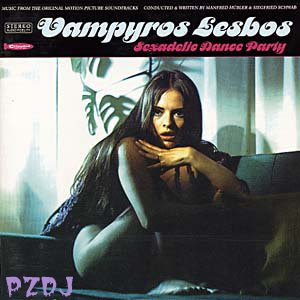 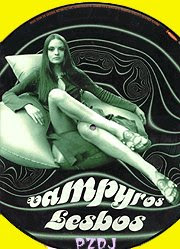 The Vampyros releases, considering their eclectic nature (1969 hard-to-define psyche-ish pop-rock music used in 3 bizarre 1970 Euro movies no one has seen), were considerably huge and became big college radio hits. Blumenstock himself went on to edit several amazing and essential soundtrack comp releases for Crippled Dick (the "Beat at Cinecittà" series and others) as well as some must-have releases on his own Lucertola label. As for the success of Vampyros, a promotional single was released and a somewhat uneven dance remix CD / double LP was produced (both seen below). At about the time of the original CD release director Jess Franco was coming out of his mini-retirement / film-making break with the release of his newest feature, the horror-sex-rock thriller "Killer Barbies" starring the Spanish garage punk band of the same name. The popularity of the Vampyros Lesbos CD and the soon-to-be emerging DVD market helped to re-ignite the career of this amazing director and bring attention to his incredible movies. And the enormous cult following of the Vampyros sounds ignited a wave of '60s / '70s Euro soundtrack, pop, lounge and other music releases that, although slowing down a bit in recent years, has not really ever let up since; turning on new fans to the sounds of composers and musicians such as Ennio Morricone, Bruno Nicolai, Riz Ortolani, Stelvio Cipriani, Italian prog rock band Goblin and many others. Not to mention the releases, re-releases and compilations of eclectic pop, lounge, library music and the "incredibly strange". Mr. Blumenstock, I SALUTE YOU, SIR! 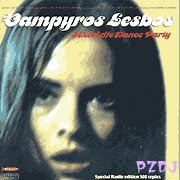 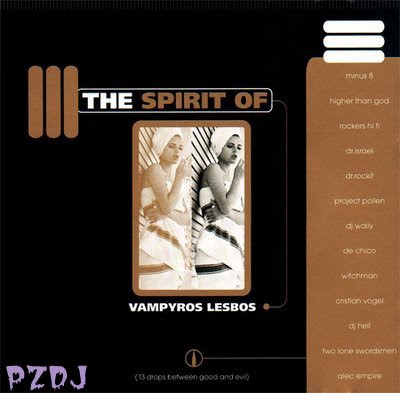 Now, as your doctor, I command you to go to the comments below where you will find the complete track listing and download link. My prescription is that you download this CD NOW and get your aural groove on! THE DOCTOR IS OUT!

EDIT: The file has been re-upped! See comments below for the link.
Posted by Dr. P. at 4:53 AM

Thanks for posting this, I'm glad to see that there were more tracks available. I look forward to listening to them.

Thanks for posting this Classic recording. I have enjoyed the LPs for years and and very glad to have them on this format.

I CAN DIE NOW!! AFTER I LISTEN TO IT FIRST OF COURSE!! FROM THE BOTTOM OF MY HEART, I SINCERELY THANK YOU!

I just saw the movie and was glad to see that these tracks are available (not just for download but hard copy as well) because a lot of these great old movies never provided the soundtrack in any format. Thanks for giving me the chance to listen before I throw some dough toward a physical copy!

Ey thanks a lot! I love it it´s really a treasure

Thanks a lot dude! I've been looking for this everywhere!

Thanks for putting this up! You should keep posting.

Incredible!!! So grateful for the effort. I came here because of a ticked off contributor Brian on Scott's Growing Bored For A Living blog, what a great trip to get here and find these gems. Your site is GREAT!!

Music from the films Vampyros Lesbos, She Killed In Ecstasy & The Devil Came From Akasava. Composed by Manfred Hubler & Siegfried Schwab