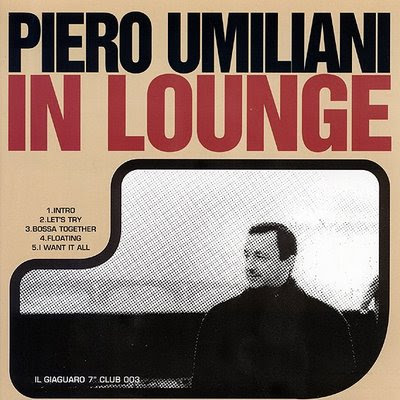 Some of you may be familiar with the cool '60s movie and pop culture magazine from Italy called Il Giaguaro. Each of the first 6 issues came with a 7" single or 7" EP spotlighting music by one film composer. (The later issues came with CD comps featuring mostly dj remixes and such) The third issue, issue #02 (the first was numbered #00), featured 5 tracks by soundtrack composer Piero Umiliani listed as being from (presumably) a movie called La Vacanza from 1966. Unfortunately the record sleeve and magazine offer no other recording information other than the year, movie and track titles. The tracks are all pretty cool and the best one, called "Let's Try", is particularly great. It starts as a slow jazzy swing and then jumps into a bouncy sixties spy-esque theme with guitar and horns. Problem is, there seems to be some mystery about where these tracks actually come from. There doesn't seem to be a movie with that title that actually has music composed by Umiliani in it. Soundtrack historian and liner note author John Bender writes on his excellent Euro Film Score Society newsgroup:

"Somewhere along the line I must have come across information to indicate that the 5 cuts on the Piero Umiliani EP released by Il Giaguaro magazine are actually from a 1964 movie directed by Adriano Barbano called IL TRAMONTANA."

"It is worth mentioning that the IMDB lists only one movie to director Barbano, and it is IL TRAMONTANA - with a score by Umiliani! Further research confirms that IL TRAMONTANA was Barbano's first and only film. He died in 1985 while working on what would have been his second film JOURNEY TO GALATINA (never completed)."

"Exactly why the Il Giaguaro record calls the film LA VACANZA is a mystery. The only possible solution might be that LA VACANZA could have been an Italian television production directed by Barbano and scored by Umilani. I say this because between IL TRAMONTANA (1964), and the never-filmed JOURNEY TO GALATINA in 1985, Barbano worked exclusively for TV. It is certainly possible that Umilani collaborated with him during those 11 years on a mini-series or made-for-TV film. Either this, or perhaps Umiliani was remembering LA VACANZA as an alternate title of IL TRAMONTANA when he gave the five cues to Il Giaguaro for the vinyl recording."

So apart from Mr. Bender's educated guesswork that leads him to assume the music might be from a movie called Il Tramontana there is bupkis information. For now it remains a mystery! Does the music come from Il Tramontana? Is there another La Vacanza no one knows about? Is Il Giaguaro Italian for "practical joke"? If anyone has any idea for sure where the tracks come from please let the good doctor know the score (hee hee) and we'll all sleep just a bit better tonight. Now, in the meanwhile, let's all dig the incredibly cool track "Let's Try"...

If the media player above doesn't show up on your web browser you can also play it on your computer by clicking here.

OR you can download the track by right clicking here and selecting "save target as..." to save it to your hard drive.
Posted by Dr. P. at 3:06 AM

Would love to hear the tracks on this Piero Umiliami Lounge album. Where's the link? I've looked everywhere. Glad I came across your site. Thanks

Rich, there should be a small media player just below the blog (after the sentence "Now, in the meanwhile, let's all dig the incredibly cool track "Let's Try"..."). I think that on some web browsers these players don't show up. I will try and go back and add a link so that you can download the track and play it from your hard drive via a media player on your computer.